Many of you have heard of Vim, a lot of people call it the greatest text
editor ever “second to none”. While that claim seems like a bit of a mouthful
and purely driven by the fans there are reasons why Vim is great, as well as
there are reasons for you not to use it.

I started learning Vim this week. Let’s make this clear, Vim is not an IDE,
you can make it look like an IDE but it won’t behave like one. As I searched
through the web for plugins to empower my Vim editor I noticed one thing:
Everyone wants Vim to be an IDE. Oh, the many out there. I don’t mind
them, but it puzzled me as a new user.

Don’t get me wrong, I love Vim. I love all the amazing text editing keymaps
you can do with it. I love how you can use Visual Block and replace whatever
text with the same name in just a matter of 2-3 keys. I love how you can just
ci” and magically delete. I love plugins like YouCompleteMe, how well
NERDTree works even though I’m looking at something like Sauce but bookmarks
do just fine, how AMAZING is python-mode, tagbar is a must, vim-airline, and
oh so many plugins out there that even in 2014 it maintains Vim relevant.

Vim is an investment. As a new user it took me a couple of days to fully get
it to where I wanted it. Just like Emacs if you want to be its user, then
you’ll know that you need to install plenty of plugins for it too.

But see, Vim is a great tool. Let me show you the first screenshot: 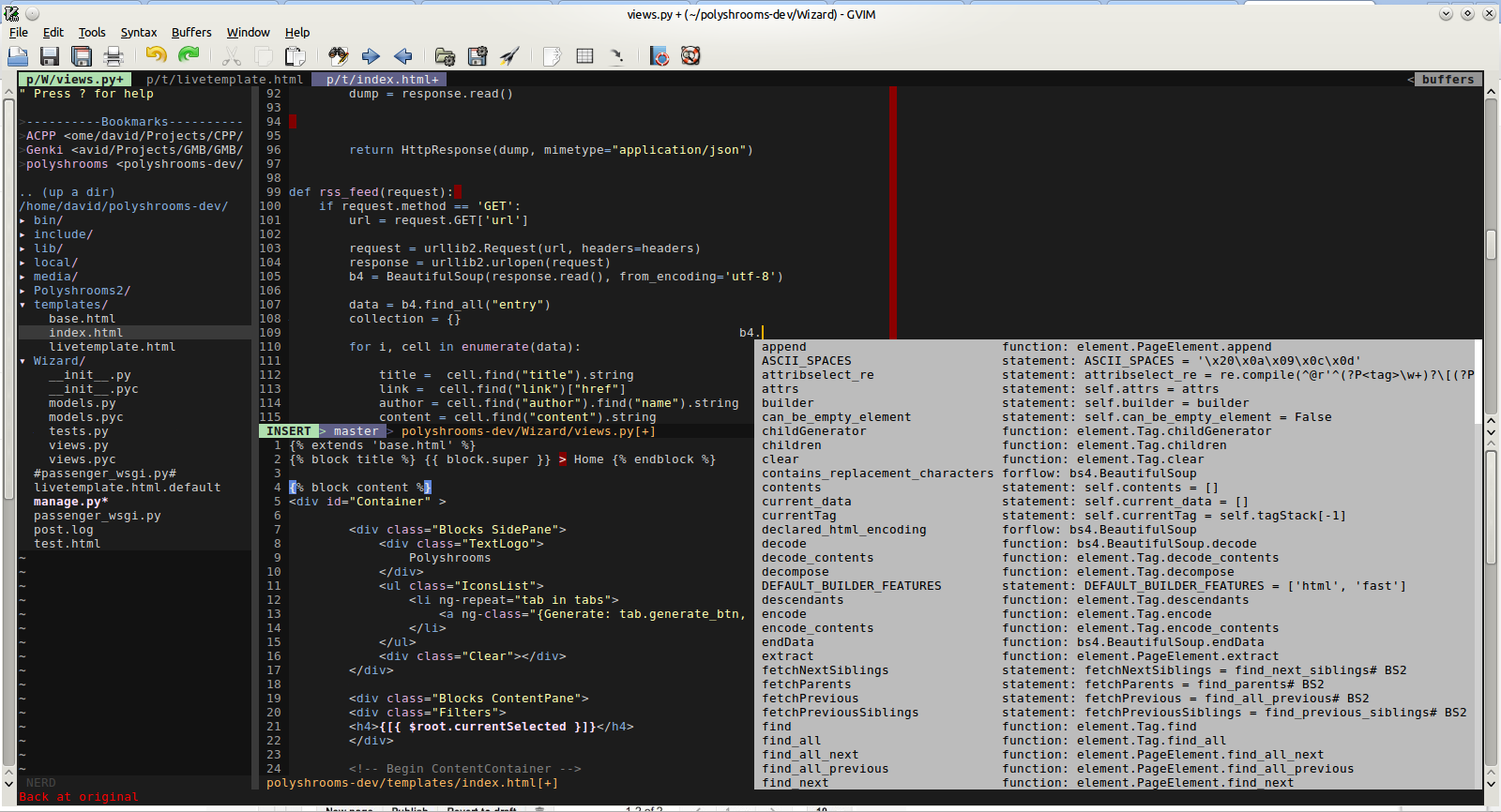 My .vimrc is a mess so I’m not going to post it here today but let’s take a
look at semantic completion provided by YouCompleteMe, it also uses omni-
completion. This is just one of my random projects. 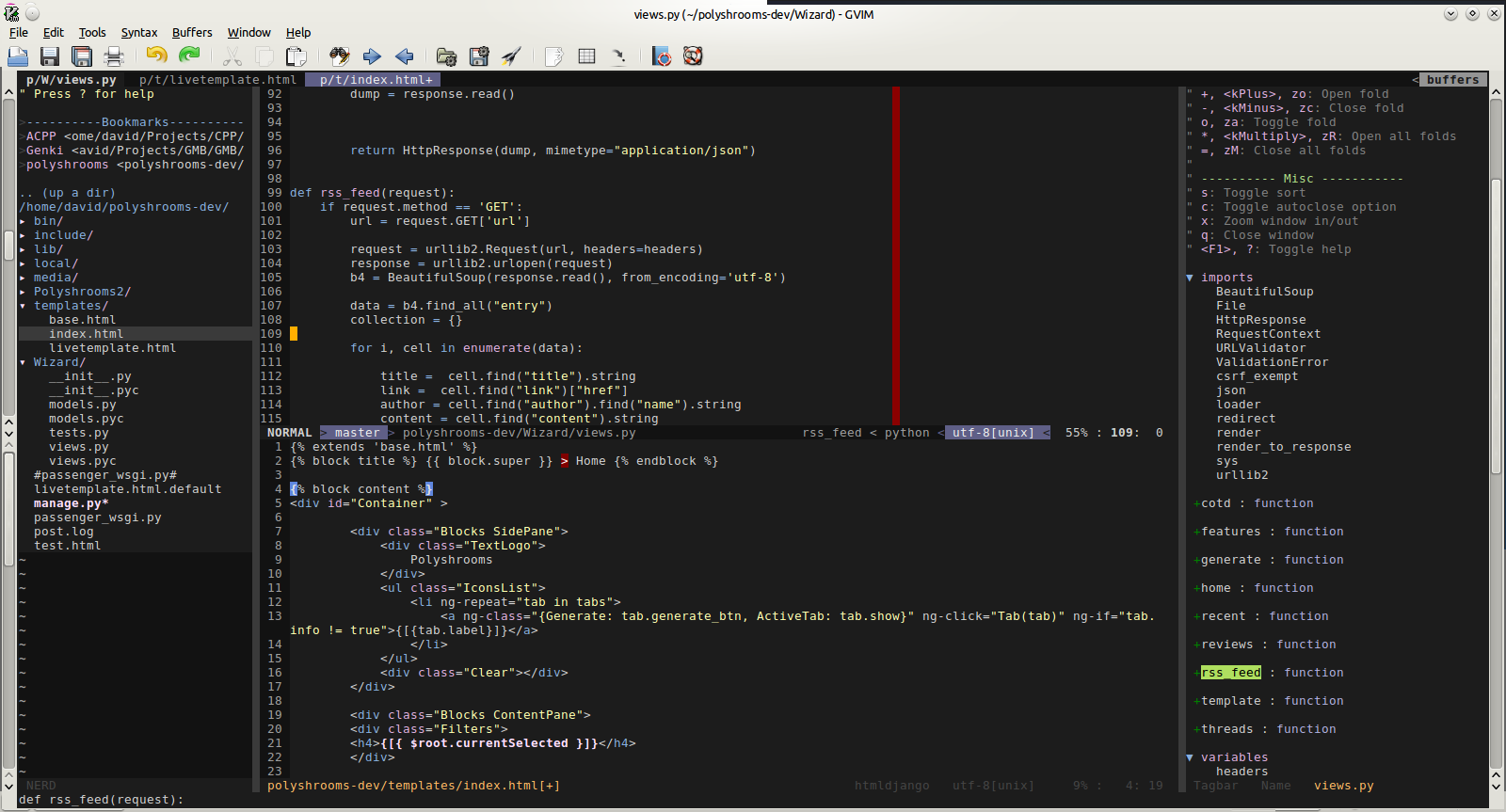 Here is a more IDE-like screenshot that shows you tagbar.

It looks great, doesn’t it? As a new user I should have waited a bit before
getting into plugins but at the same time I wanted to do some C++ already. My
reason to choose Vim was because Eclipse just keep crashing over and over
again and it also froze several times. Netbeans didn’t even want to work.

So, I chose Vim because it was THE text editor I needed. The world whispered
in my ears and said “Use vim, use vim! You won’t regret it!” I don’t regret
it. I like it, I haven’t worked on a REAL project with it but I know that
it’ll be a delight to work with.

Now, all my praises for it so far ends here. Let’s go on to why you might not
want to deal with vim.

Listen, if I were to choose between PyCharm and vim, my answer would be
PyCharm. It removes a lot of the hassle that is introduced by vim. But see,
vim is a text editor and such it cannot be blamed for not working as one.

So where’s the investment exactly? Text editing. No, really. Once you learn
the flow of vim you will be fast to get that source written. At first, you
will feel slow, frustrated because the workflow is really different. I know I
have. Heck, I have started typing while it was in Normal Mode and I’ve screwed
up plenty of files due to that. It happens because we are just new to vim.

Is it worth the pain? That’s for you to choose. I’m sticking with it for a
while because it doesn’t hurt.